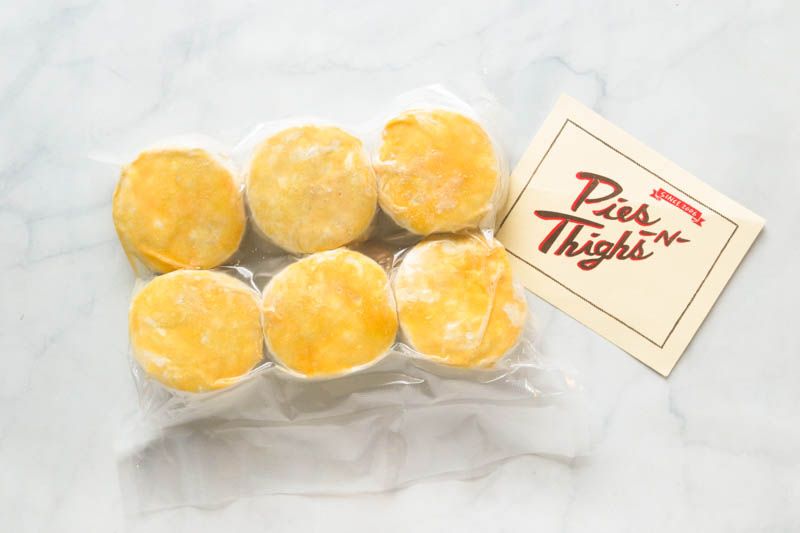 The buttery, flaky southern biscuits of your dreams! Our friends over at Pies 'n' Thighs have made their signature buttermilk biscuits available for you to bake at home. Just pop them in the oven, and fresh, hot biscuits are ready for your table in minutes, no fuss no muss. Serve with a smear of honey butter or jam; top with a sausage gravy or piece of fried chicken; get adventurous and make a monkey bread. BISCUIT COOKING INSTRUCTIONS: Keep your biscuits frozen until you are ready to cook them. Place your oven rack in the middle and preheat your oven at 400 for 15 minutes. Put the biscuits on a sheet pan spaced 2" apart (you can put a sheet of parchment down if you have it, but the biscuits are buttery and won't stick much to a bare sheet pan). Cook at 400 for 15 minutes, then turn your oven down to 350 and cook an additional 20 minutes. Oven temps can differ, so at that point, peek inside a biscuit to make sure it's done - you should see fluffy layers pulling apart. 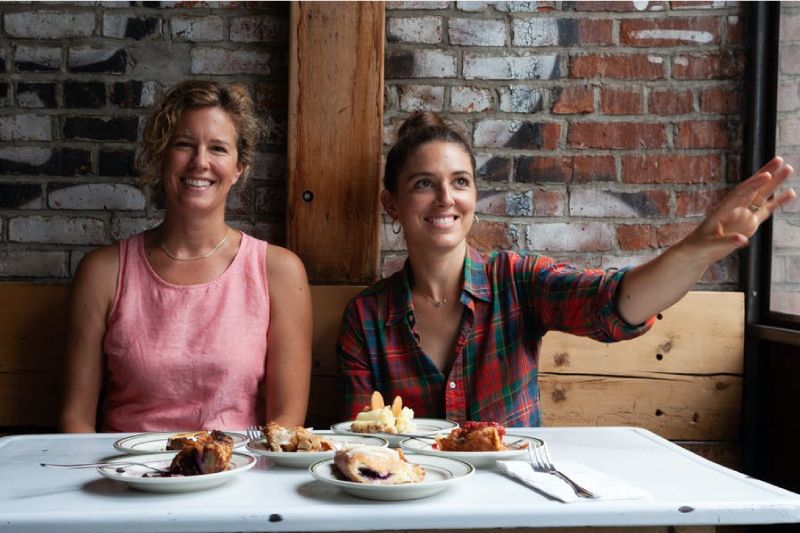 Pies ’n’ Thighs started in 2006, in the shadow of the Williamsburg Bridge. Owners Sarah Sanneh took over a beer storage closet and transformed it into a tiny kitchen with six stools, serving huge donuts, two-napkin smoked pork sandwiches and salty, crispy fried chicken. The New York Times called the pies and the thighs “…a compelling combination, well executed and put forth with real heart—the sort of restaurant that’s hard to find, especially in the big city, but easy to love once found.” They believe that comfort food speaks to everyone. Owners Sarah Sanneh and Carolyn Bane met as cooks at Diner, a nearby Brooklyn institution that has been the parent restaurant of many local favorites. Sarah and Carolyn are inspired by classic American dishes, Mexican and Californian cuisine, and the Slow Food movement’s attention to ingredients. We have been awarded Best Donut in New York by New York, Best Biscuits in New York by the New York Daily News, and Best Apple Pie and Best Fried Chicken in national surveys by Food & Wine and Bon Appétit.

Keep frozen. Can be baked from frozen.